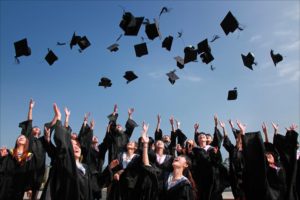 Stafford: This is the primary federal loan for students. Students can get the loan either direct from the government or from private lenders such as banks and credit unions (through FFLP). (However, the new administration has proposed eliminating private lenders from the federal program, and many banks are longer in the business).

PLUS: Parents can take out federal loans to supplement children’s aid packages. As with Stafford loans, PLUS loans can be either direct loans or negotiated through a private lender. PLUS loans are the responsibility of the parent, not the student. Graduate and professional students can also take out PLUS loans for their own education. Repayment on Parent PLUS loans usually starts 60 days after the funds are disbursed although an option now allows for deferment while the child is in school.

Perkins: This is a federal loan available to students with exceptional need. The school acts as the lender, tapping a pool of funds provided by the federal government. The interest rate is very low. There is no fees.

Private: These are loans from banks, credit unions, and other private lenders. The interest rates are much higher. Eligibility and loan terms depend on your credit score. The provisions for deferment are typically not as lenient as with federal loans.

Which is the best loan to start with?

Even if you don’t qualify for the subsidized version, a government-backed Stafford loan is cheaper and has better repayment terms than most other loans. The unsubsidized Stafford loan is available to all students, regardless of family income or credit score, and has a fixed rate of 6.8%. The annual limit is: $5,500 for freshmen, $6,500 for sophomores, and $7,500 for juniors and seniors.

The PLUS loan has a fixed rate of 7.9%, if your child participates in the Direct Loan program; otherwise, it is 8.5%.

The last resort is private loans. Many lenders have stopped issuing private education loans, and most that remain have been raising rates and eligibility requirements. Also, they tend to carry variable rates, so make sure to read the fine print.

The new law is titled “The College Cost Reduction and Access Act of 2007”.

The new law creates a new repayment program – income based repayment (IBR), which significantly reduces monthly payments for borrowers with “partial financial hardship”. Basing loan payments on income isn’t a new concept. For years, graduates with federal student loans had options to reduce or eliminate their payments. But IBR is intended to be more generous.

IBR caps monthly payments at 15% of earnings above 150% of the poverty line, or $10,830 for a single-person household. There are situations in which an IBR payment would be zero. Borrowers who think they could benefit from IBR should contact their lender and ask for an application that would authorize the release of their gross income from the IRS each year.

The portion of a private student loan that is exempt from bankruptcy protection is only that portion used to pay for cost of attendance (tuition, room, supplies, etc.) Other expenses, and fees do not qualify.

What is a “Deferment” and a “Forbearance”?

Deferments allow eligible borrowers to postpone paying back their student loans under certain circumstances. In most cases, interest does not accrue during the deferment period. Only borrowers who have not yet defaulted on their student loans are eligible for deferments. Deferment rights vary depending on the type of loan and when the loan was incurred. If a loan is being deferred, the loan is not in default, and the borrower will not be subject to debt collection. A deferment occurs when a borrower is “delinquent” on a loan, but not technically in “default”.

The economic hardship deferment is the most complicated and usually the most important for borrowers. Borrowers who are qualified for a deferment under another federal program, or that receive public assistance automatically qualify for a deferment. Also, if a borrower is making less than a stated income, he or she can qualify. This amount is minimum wage or the federal poverty level for a family of two (regardless of actual family size). Generally, a borrower in a bankruptcy or unemployed also qualifies for a deferment.

A person in default of a student loan can receive a forbearance, a temporary stoppage of payments or an extension of time for making payments, or the acceptance of smaller payments. Interest still accrues during this period of forbearance. Many agencies have developed policies for granting a forbearance for loans in default. The forbearance will not remove the default status.

In recent years, the Department of Education has significantly increased collection efforts. The government has collection powers far beyond those of most unsecured creditors. For example, the government can:

holds. It likely holds Direct Loans, Perkins loans, and certain Stafford loans, after the guaranty agency has assigned those loans to the Department.

The Department also contract with private collection agencies to fulfill many of its collection responsibilities.

Delinquency begins on the first day after the due date of the first missed payment. If a loan is delinquent, lenders are required to provide the borrower with certain information and notices.

A student loan is in default if it is over 270 days late. At this point, the lender or guaranty agency or collection agency can begin collection activities, under their regulations.

What additional collection fees and penalties can be assessed against a borrower of student loans?

Collection costs should be recalculated each year after a loan goes into default. As to each loan in default, the amount of the previous year’s collection costs should be removed from the balance of the loan and the newly calculated rate should be applied. Rates should also be recalculated each time the loan is transferred from one entity to another. (In other words, the collection fees of the previous collector must be removed if the loan is transferred to another collector).

Guaranty agencies must only charge amounts equal to reasonable costs incurred in collecting. The rules for lenders are different. The lender can seek no collection costs unless such charges are authorized in the promissory note and such costs are actually incurred by the lender or its agent.

There are some ceilings on the amounts of collection fees that can be charged. Fees are limited to 18.5% at the time of sale for rehabilitation, and the same limit applies to consolidated loans. Student loan regulations set out a formula for computing collection fees as a percentage of the debt if a collection agency is hired based on the contingency fee arrangement.

The Department has clarified that the borrower is not legally obligated to pay costs that have not been incurred. There can be no “up-front” loading of collection costs.

Many fees are not questioned by the borrower. The reality is the government or collector may lack the authority to collect fees, penalties, and costs.